Christophe Grosset writes a column in the English Bridge Union magazine in which he makes a bridge deal analysis that he played on Funbridge. You can find below his latest article published in the December 2018 issue. 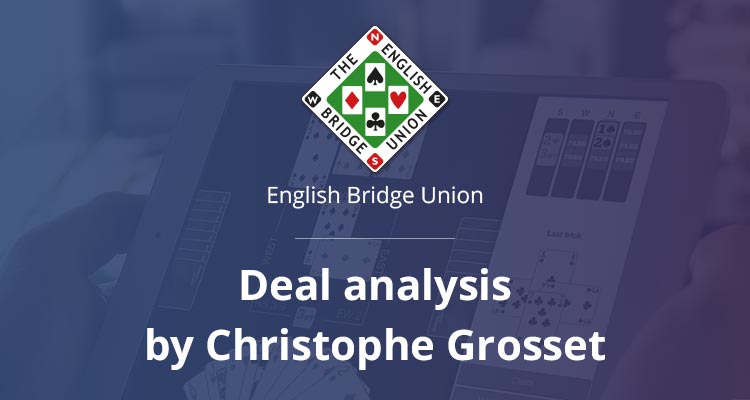 Since August 2018 and the update of the Funbridge bridge game, it is now possible to learn bridge through the app with our brand new introductory module to bridge.

Thanks to lessons and exercises developed by our experts, learning the basics of bridge has never been so easy. And it’s FREE! You can:

This introductory module is designed for beginners who want to start playing easily as well as any players willing to review the basics of the game quickly.

Today’s board is about making mistakes … and giving the opponents the chance to make errors too!

Starting with the bidding

After a straightforward 1♠ bid over partner’s 1♥ opening, North has to decide between 3♥, 3NT and 4♥ over 3♣. Having the ♣Q and the ♥A probably makes 4♥ the better bet, but North decided to bid 3NT and dummy will prove that this was indeed a mistake.

Clearly, 4♥ was a better contract, losing at most one diamond and two hearts (you could go down on some very bad breaks of clubs and hearts). Fortunately, you are playing a teams match, where scoring nine tricks in no trumps will reduce your loss to 1 or 2 IMPs at most, so this is not the time to think about what you should have done. What are your thoughts regarding 3NT?

Move up to card play

The most likely chance to make your game is running hearts for six tricks, alongside one diamond and three clubs for plus one. Another option would be scoring five clubs, one diamond and either three hearts or two hearts and one spade. Ideally, you would like to combine these chances, but the run of spades should make this impossible.

Your opponents might make a mistake, or just have a very hard decision and make the wrong choice. For instance they may switch after two rounds of spades, with East being afraid of giving declarer any extra tricks. Over to the play: you discard a diamond on the first spade which West wins with the ace and returns the ♠J. You cover but East takes the ♠K and you discard … a heart ! Yes, we saw earlier that by establishing hearts you would make six hearts, three clubs and one diamond, that’s 10 tricks and you need only nine

By discarding a heart, you don’t put your contract in danger if hearts behave nicely but you do give yourself the extra chance of going for five clubs, one diamond and three hearts if, say, East has the stiff ♥Q (not so unlikely when he has five or six diamonds and four spades).

East is now down to ♠96 ♥Q ♦KQ952 ♣952. Will he decide to continue spades forcing dummy to discard a club or switch to diamonds leting declarer try for the additional chance of scoring five clubs, three hearts and one diamond? Sometimes he’ll do one, sometimes he’ll do the other, but only the declarers who kept all of their clubs will have the chance to make the contract when the defenders get it wrong.

Not in connection with this hand but I have a question.
North opens one of a suit and partner passes with 6 points (3 queens) and a balanced hand. Should S have bid 1NT or is there a rule that says don’t bid if hand holds 3 queens? N had 19 pts balanced and game was missed.

I don’t think there is a rule. I do think, though, that the quality of your Q-headed holdings matters a lot. It is often overlooked by pretty much every player, but this is an iron law of bridge:

Any card you don’t see in your hand is twice as likely to belong to one of the opponents as to your partner.

Of course, I am talking before you know partner’s hand. Therefore, Q-x is not likely to be as good a holding as Q-x-x. Q-x is likely to fall under the opponent’s A-K with no gain to your side.

This a tough one. Theoretically, North should have a better hand than if the double is made at a lower level. She is trying to commit the partnership to a nine-trick contract, with no knowledge of how strong her partner’s hand is.

However, as I read somewhere, “In theory, theory and practice are the same–in practice they are not.”

My take is to bid my best suit and hope for the best. Sometimes, you will land on your feet. Sometimes not, but as someone once said

The exception to this is if any take out looks truly awful. Then I leave the double in, and hope for the best.

I recall a hand from some years ago, My LHO opened 3H, my partner doubled for T/O, RHO passed, my hand was truly awful, to left the double in.

RHO of course, had a monster, and they made 3 overtricks.

Preempts work, that is why people keep doing them.