This sunday evening, Léa is the one who contacts me to tell me about a deal she played. Léa is a good element but she has a big flaw: she is never wrong. She always talks about the mistakes that her partner made, without questioning herself.

She sends me an image with the bidding sequence, her hand and dummy’s cards:

She tells me about the problem she faced:

Léa: “I led the King of Spades and Alice made a mistake, she played the two and declarer followed with the three. You agree that now I cannot continue with another Spade?”

Me: “I don’t understand what you mean when you say she didn’t play well.”

It does not take long for her following message to get to me:

Léa: “Bah, you have explained to us many times that when we lead a King against No-trump, this asks partner to unblock their honor (or one of their honors).”

Me: “Yes, you are right, but I also said that there were three exceptions: when dummy has Jack third, the ten fourth or a singleton. In all three cases, your partner’s honor is too important to be wasted on your King. You must see that if she had played her Ace on your King, this would have established dummy’s Jack.”

Léa: “Yes, I now remember – but in that case, how could I know that she had the Ace when she played a small Spade?” She could have at least played a high card!

Me: “You know, I don’t know if she had a high card to play but anyway this is not a situation in which she needs to show attitude.”

Léa: “So, I have to guess? I need to think that opponent who has opened 1NT has nothing in Spades?”

Me: “Stop for two seconds and think. Who has the Ace of Spades? You should know it.”

This time, Léa takes longer before she finally answers:

Léa: “Ah yes, right! South cannot have the Ace, or he would have played it! If he won my King with the Ace, that would ensure him two tricks.”

Me: “Oh yes, and your partner’s Spade two often comes from three cards. Do you imagine South ducking the first round of Spades if he has the Ace?”

Léa: “Yes, it’s silly, I could continue with a small Spade at the second round to drop his Ace and he would only get one trick!”

Me: “Yes, and if he did duck with three or even four cards, you will only give him the tricks to which he was entitled at the start.”

Now she shows me the full deal:

Log in with a Premium+ account to discover the full deal and the end of the conversation between Wilfried Libbrecht and Léa! 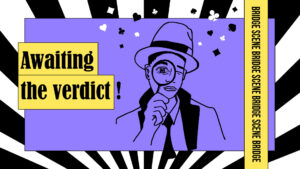