Discover 3 deals analysed by Zia Mahmood from his May tournament.

I probably shouldn’t have bid 2NT here, preferring to pass 2 ♦ out. But playing in two of a minor so often leads to an indifferent matchpoint result, and sometimes we might make a game, so I hoped to improve the contract.

My robot partner had enough to bid game, and it brightly advanced with 3 ♥ in case I had five of them. I didn’t have five of them, but now it sounded as though there were short spades opposite so I didn’t want to play in 3NT either. I passed and hoped for the best, conscious that I was in a contract the field almost certainly would not locate – a recipe for a top or (far more often) a bottom score.

My luck was in. There were only seven tricks in a notrump contract, but nine in diamonds – if I’d passed 2 ♦ we’d have been fine. But, remarkably, there were also nine tricks in hearts since I could take two tricks in each side suit and scramble three trump tricks with a mixture of high, middle and low ruffs. Plus 140 was almost a top – judge for yourselves whether I deserved one.

Styles vary with hands like South’s – there are those who say that a good five-card major should be opened, while others believe that 1NT is de rigueur on any balanced hand within the 15-17 range (and a few hands outside that range, or unbalanced, or both). I do what my partners prefer me to do, but I hadn’t discussed the situation with the robot so I tried 1NT. It raised me to 3NT and West led a heart, giving me a sinking feeling when I saw the dummy.

But I put up ♥ K which held the trick, and now I tried a move that really shouldn’t have worked by playing ♠ 9 from the table. Of course I wasn’t going to run the card, but the East robot perhaps feared that I might so it covered with ♠ 10. When my jack held I was up to five spade tricks and a heart to go with at least two in each minor for ten tricks. This was pairs, though, so I was eager for more.

As you can see, I could have made all 13 tricks with the lucky position in the minors, but I had to cross to the table to repeat the spade finesse so I led a low club to ♣ K. The marked finesse of ♠ 8 let me run the spades, but perhaps I should have cashed ♣ A before doing that. As it was I pitched clubs from dummy on the spades, but when West threw a diamond I was able to bring in four tricks in that suit for plus 490 and a huge matchpoint score.

This time I wasn’t so lucky. When my partner used a splinter bid of 4 ♣ I liked my hand, because if his high cards were outside clubs my fillers in hearts and sturdy trumps offered good prospects. Try to picture average hands partner can have when you’re aiming for a slam – here. something like

would give excellent play for twelve tricks, so I showed a diamond control. Partner reciprocated in hearts, then it bid Blackwood and settled for what I hoped would be a comfortable slam.

Alas, the robot West wasn’t a banger-down of aces – it found the good lead of a trump. The communications just aren’t there to ruff two clubs in dummy and run the heart suit, so I had to fall back on an eventual diamond to the king. When West produced ♦ A I was down one – a 25% board because others had shared my optimism, but a blow nonetheless.

Worse was to come, for the Funbridge game has a feature where your robot partner rates your performance. I was solemnly informed that I didn’t have enough points to bid a slam – I only had 11 and I needed 14. If a human partner had told me this, I’d have taken that singleton ♣ A and stuffed it down his throat to teach him to have his high cards outside his short suits when making a slam try. But with a robot – well, what can you do? 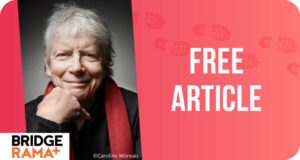 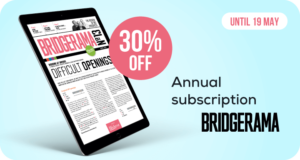 30% off annual subscription to Bridgerama