The Experts’ Answers
Deal 1: A slight risk
Deal 2: Neither yes nor no
Deal 3: One more convention
Deal 4: Better safe than sorry
Deal 5: A difficult one to show
Deal 6: An obscure sequence
Podium
Share your opinion

Enough of all the Parisian superiority. This month, the last four deals are from Lyon Festival, which was revived this year in the month of September. Our tour of French clubs has brought us to the Mediterranean sun, ready to be met by the Blue Bridge Club in Cannet.

Summary of the experts’ answers

15 HCP and a shortage in the suit opened; everything is in place for a protective double… in theory. So, what is the problem? Toffier and Sylvie Willard explain it to us: “Double. There is a non-zero risk of Partner passing but no other bid suits our hand.” They were supported by a large majority (19 out of 29). At the Cannet club, it was a real winner: “Around 75% of the players at the BBC were in favour of doubling. Fear will not protect you from danger.” Most considered the vulnerability to be an important factor and that even if the auction ended, that would not be too bad. That was the case with Volcker: “Double. We are vulnerable against not: my partner shouldn’t pass too often…”, Quantin: “Double. If there is a worry to be had about this ‘obvious’ bid, it is that Partner might convert the take-out double to penalties. The prospect of finding ourselves defending against 1 Club is not thrilling. But that is taking a dim view of the situation: even if Partner did pass (and that were not a good decision), Opener’s partner will, no doubt, be a long way off accepting that contract.” and Justin Hackett: “Double. To show a strong hand with Diamonds later on. If everyone passes, I still have some defensive tricks.”

The other doublers explored other avenues and then abandoned them.

Kokish: “Double. Dangerous, of course, but 2♦ is an underbid and a cue bid would show a two-suiter. My diamonds are not good enough for bidding 3♣ as a stop ask. That leaves double or 1♦. At this vulnerability, 1♦ is insufficient.”

Rocafort: “Double. Clearly, this is not a cure-all: we are trembling a bit at the idea that that could be that; but the alternatives are not very attractive. I cannot even proceed as though playing opposite myself… because then, 2♣ and 3♣ would be two-suiters. Simply trying 1♦, seeing what the three others make of that and then reacting accordingly would not be totally silly.”

Kerlero: “Double. I have the feeling that we might stay there and that that will not be good… But what can you do? Even if I were perfectly OK about raising the upper limit for balancing in a suit, it still seems to me that I have too much for 1♦.”

Libbrecht: “Double. I can well see the problem: partner potentially passing with a more rewarding contract available for our side. But I do not like forcing to game with a 3♣ bid with all these tenaces positioned the wrong way round. Double followed by 3♦ seems more suitable to me.”

All of these other bids that have been mentioned still got one or a few votes.

First of all, there are the non-French players who, it seems, do not have the same conventions for balancing as the standard French system: Jill Meyers chose 2♦ and Żmudziński: “3♦. Between double and 3♦, that depends on the system you play. For me, 3♦. For the jury, double.”

And then, among the French, you will find all those for whom the fear of playing in 1 Club Doubled was stronger than anything else. Their votes were divided between 1♦, 2♣ and 3♣. I have chosen one representative for each of these bids.

Cronier: “1♦. I do not want to play in 1 Club Doubled; I can’t say 2♣ (major two-suiter for me). I could try 3♣, with a mind to asking for a club stop for playing in 3 No-Trumps and showing a strong single-suiter with Diamonds. But I still have a few gaps in my hand and prefer to protect at the 1-level with ‘a bit more in the tank’. I’ve heard tell that in today’s bridge, balancing at the 1-level can be a bit stronger than it used to be. Here is the proof!”

Lhuissier: “3♣. Asking for a club stop to play in 3 No-Trumps. 2♣ would be the majors and 2♦ natural. At this vulnerability, I cannot double.”

The final say goes to Adad, who gave me this problem: “3♣. We played in 1 Club Doubled (I had AKJ9x) and I suggested to my partner to balance with 1♦, as we surely won’t end up there..? On reflection, 3♣ should show this type of hand. With a major instead of Diamonds, you would bid game.”

Remember: what should 3♣ mean in this sequence? As for everything else, I think that you do not need to look to “come up with” anything. In my view, you should make the bid that describes your hand the best and trust your partner. He can see the vulnerability as well.

Deal 2: Neither yes nor no

With this hand, should you strongly discourage your partner, who would like to go to slam? Yes, say four experts, including Lhuissier: “4♥. No desire to go to slam with an eight-card fit, tonnes of ruffs to take and abysmal trump quality.”

No, reply the other 25, though aware that they should not be doing too much. This was summed up by Chantal Nevers: “3NT. Better than 4♥ but worse than showing a control. Ace-King-Ace is good news but four trumps without an honour and a void in my partner’s suit: bad news.”

I subscribe to this analysis and recommend this convention. The main thing, as usual, is to carefully define the meaning you assign to this 3NT, as opinions vary.

Chemla: “3NT. This bid should show slam interest with poor trumps, among other meanings.”

Adad: “3NT. A non-serious bid showing weakness in Trumps and a 4-4 fit; less discouraging, though, than 4♥.”

Piganeau: “3NT. Nice hand but with two downsides (the void and the mediocre hearts).”

Lévy: “3NT. Yes; but. Too many controls to settle for 4♥ but the trumps are too weak for you to show a control.”

This “yes but” seems to me to be a handy formula to remember. You need to be able to say that you do not actually have either a 5-4-2-2 11-count or the means to take charge by starting a cue-bidding sequence.

On the other end of the scale, you find all the more reckless players who start cue-bidding. Some with 4♦. Why? A mystery…

Jill Meyers: “4♦. My hearts are horrible but I have too many controls to settle for 4♥” and Toffier: “4♦. Sure, my heart suit is nonexistent; but on the other hand, I do have a maximum opener. I should make a try.”

Others tried 3♠, which seems dangerous to me but limits the risk of an accident compared to 4♦. Thuillez: “3♠. Bad trumps and a club void are bad news but the hand is too nice to settle for 4♥.”

Duguet: “3♠. Followed by 4♦. Aside from the trumps, I look good… Let Partner bid Blackwood with good trumps (I will not be showing my void!).”

Saporta: “3♠. I like my hand, despite the misfit in Clubs. 3NT (good minimum) seems less appropriate.”

As it happened, Partner had ♠J6 ♥KQJ3 ♦5 ♣KQJ875. As you were missing two aces, you could stop in 5 Hearts; but with a non-negligible risk of going down…

To discover the bridge experts’ detailed answers to the 6 deals of the September 2022 Bidding Contest as well as the full rankings, please log in to the Funbridge blog with a valid Premium+ account. 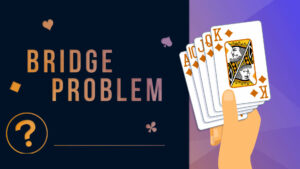 Better than a French Championship finalist? 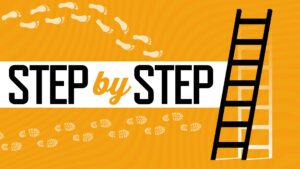 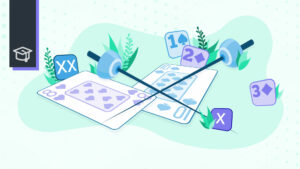 Defense against an artificial overcall over 1NT.